Brathay 10in10 – Chapter 11 – Steal the Apples of the Hesperides

Well, it’s over, done, all ten complete.  Having stayed for the celebration meal, many hugs and many a thank you, the children and I have dashed back to home to resume regular, daily, weekly ‘life’.  Nothing like children to help keep you grounded.

As I begin to write it is currently half past midnight.  I’m tired, the drive back home was difficult as I just wanted to fall asleep, but now we’re here and the children are all tucked up in bed, I want to fulfil the promise of completing a diary entry per day during the Brathay 10in10.

George Sherriffs and I set off at a little after 7:15am this morning.  George had unfortunately torn a muscle in his quad only for or five miles in to his run on Day 9 so was in considerable discomfort and pain.  Both of us thought if we set off early we would be back in time for the Presentation Ceremony with our fellow athletes at around 3:30.  Unfortunately, the sacrifice was missing the gladiatorial parade and team huddle compèred by the inimitable Rich Rex at 8:45am.  Twas therefore an early start 6am, up at 5:30 and a disturbed night’s sleep prior, it was after all the ultimate day and jitters are allowed.  On waking my ‘landing gear’ was still not working so the slow walk down to receive physio seemed to take a painfully long time and I’d skipped my usual bowl of pre-marathon Sugar Puffs to boot.

Still, seeing the rather ‘happy 6am face of post-kayli‘ (sarcasm applied) Aimee and at least I was ready to face the day with a smile.  This young woman has for the last ten days put up with me morning and evening, the tantrums, the yells, the old jokes (some of which she didn’t know), the tunes (at least I’ve helped to improve her musical repertoire and expect her downloads to reflect her new learnings, especially the purple one and The Waterboys).  It might sound sentimental and perhaps another physio may well have looked after me as well as Aimee, but the way I feel at this moment and when I was on her plinth yesterday evening and this morning, I sincerely doubt it.  She has tweaked my achilles back to flexibility, compressed my calves, and generally massaged my muscles (including performing DTFM) giving every chance of fulfilling my goal.  I hope we’ve become friends?  The way I feel about this young woman; she deserves success, she deserves to be happy and if there is anyway I can repay her patience (even though I have very little money) she need only ask, I hope she trusts me to be there for her as she has been there for me?  Whether she understands or not, I simply could not have done it without her, we did this, together.  Her reward, experience; my debt at this moment incalculable.  By the way quick shout out to Dr Katie Small, I think I’ve worked out an analogy for the hamstrings; Aimee wasn’t far out, it just didn’t sit well with me, but what about trebuchet?

Sensible head on this morning; Adam taped me up, I swallowed my two ibuprofen and hobbled down to the start.  George galloped off and for about two to three hours (who knows because time is irrelevant out there) I was officially second (out of two starters).

It is about time I mentioned the pair of Dave(y) Green (apples), who have both been gentlemen all week, one slightly more reserved than the other, you know who you are Davey Green, but gentlemen nonetheless.  Dave Green has been very kind to me, and whilst our conversations have been brief, he has never felt the need to pass on unwanted advice, he’s remained considered, impartial, reverent.

One of the last comments I made on facebook was that it was time to ‘man up’ in less eloquent terms, ‘grow a pair’.  I didn’t grow a ‘pear’ today but my hard work, and the selfless encouraging nourishment through the support we’ve received at Brathay; from the Support Team, our fellow athletes, the physios and the hard work from everyone has yielded the physical harvest (if you wish the Apples of Hesperides) I desired (medals, my name on the list of 10in10 finishers and an official hoodie, at some stage).  What was unexpected was the emotional rewards; at the start line was my Mum, I’d never expected her to be there and it took two glances to realise.  I’m still incredulous at the support I’ve received and can’t quite understand why others think I deserve it.  Maybe this exercise will help me to realise that whilst I cannot change the past I can have a say in the future.  I appreciate this is a lot of waffle but these thoughts are fresh and I want to capture them whilst they can still be frozen, like Bird’s Eye peas.  I knew my sister was due to be at the finish line with my children, but I didn’t expect Kim or Debs.  Why they had travelled hundreds of miles to see me put one foot in front of the other I’ll never know?  But even if I never know I’ll always be grateful, I must be worth something to have such good friends and family.  In a way I feel guilty for not always being there for Emma but I am proud to share today with her, she deserves some acknowledgement and recognition for putting up with her daft older brother!

What was amazing at the finish was the hugs, the crowd, and even tears from Aimee (gotcha!), bang went her street cred credentials.  I forgot to mention yesterday, Day 9 we ran in together to our own sound track of Oasis

Today is gonna be the day That they’re gonna throw it back to you By now you should’ve somehow Realized what you gotta do I don’t believe that anybody Feels the way I do, about you now

Because Aimee, you’re gonna be the one that saves me And after all, we’re from Cushendall

Today was slow and once again painful, but once the legs got moving and I accepted the discomfort I shuffled from mile 2 right through to 26.2 (I may have walked Devil’s Gallop, but only to protect Dad’s Army and my worryingly dodgy left Trebuchet).

At just after mile twenty coming down the hill into Bowness (after being passed by the amazingly poised and powerful Paul Brown – mile 15, the relentless and efficient Jonathan Carter – mile 16, metronomic Malc – mile 17 and the resolute Sean – mile 18) I felt a pop in my lower left leg (maybe it was nothing but it bloody hurt for a moment).  Two hundred yards later one of my heroes, Rich Rex passed me, gave me a hug and said something along the lines of ‘amazing effort’.  I mentioned that I thought something had gone in my leg, his reply, in his true Northern Grit style ‘aye probably, but let’s get it done’.  Left to my own devices there was nothing more for it than to keep shuffling.  The real marathon lead car passed me at mile 21 and the first runner loped past me towards the foot of Ice-cream Mountain.  How did he make it look so effortless?  Barely two miles later and the Silent Assassin eased by, how she does it (as well) I’ll never know (unless she gets a sneaky lift)?  Anyhow, no other female runners went by me until almost mile 25 at which point I was hoping that Liane, might even get first female.  It clearly wasn’t to be and her time wasn’t even as fast as the previous day; all I can say is that there is a lot to be said for microwaved scrambled eggs!

Before mile 20 it felt like my top was catching, at the top of Ice-cream Mountain I was sure it had been and asked Mac Knowles if he had any vaseline (unfortunately not), so for the next 4.5 miles I ran with my left hand clutching my Brathay 10in10 shirt away from my chest.  People watching me perhaps thought ‘look at him, he’s giving everything for Brathay and even holding the badge to indicate his desire for the charity’?  At least I hope they thought that?  The truth of the matter is that I was ill-prepared this morning, forgot plasters and vaseline and ended up with blood all over my left breast, now off to nurse sore nipples!  At least it took my mind off my shins for a while.

Can’t explain how I feel now, I’ve not watched TV for ten days, barely read, all that I’ve done is eaten, slept, been pummelled and pulled in physio and for 262 miles put one foot in front of the other.  There is a story in there somewhere, a meaning for all of this, after all I asked for it, and I’m sure I’ve found out more about myself for struggling through for several days and never giving in (despite wanting to yesterday).  Will it serve as a lesson to me, to others, who knows?  Aly said it would change my life.  Katie and Adam said to make the most of what I’d achieved.  At this point in time (it is now 2:38am), I wish I was back at Brathay amongst it all still, may be for me it is a once in a lifetime event, may be it is the beginning of something new, all I know is that even though I’ve got the ‘apples’, I simply cannot let the pips go to waste. 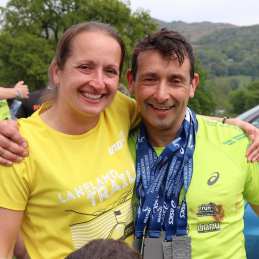 You're Not All That